Where to Find The Files 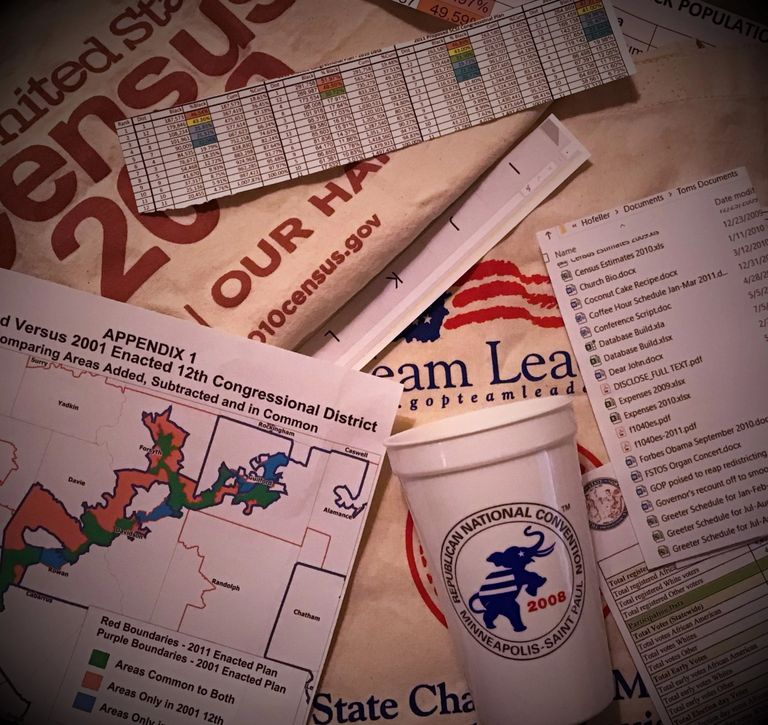 Tom Hofeller was the unquestioned redistricting expert for the GOP, from the late '70's until his death in 2018. He was one of the principle architects of the Gerrymandering effort that became known as

Shorty after his death, in 2018, his daughter, Stephanie (that's me) found the cache of backups, and turned them over to counsel for the plaintiffs in Common Cause v Rucho and Common Cause v Lewis, litigation challenging Hofeller's state and federal district maps in North Carolina

Every ten years, after the census determines shifts in population, the process of re-drawing state and federal voting districts begins. This process is known as Redistricting. "Gerrymandering" is when districts are improperly drawn in a manner that unfairly advantages one political party or candidate.  When it's done skillfully, an incumbent at risk of being unseated might find themselves undefeatable and the party with the minority of registered voters might obtain a majority (or even a super-majority)  in State Legislatures and/or Congress.

Upon finding itself a shrinking minority, GOP leadership at the national level began an effort to influence local elections in swing states, for the purpose of gaining control of State Legislatures, which, in many states, control the Redistricting Process. The plan's peak success was reached after the 2010 census, when voting populations predicted a rise in Democratic party representation. Instead, the election yielded staggering defeats for the Democrats, and set the stage for the "unexpected" victory of the Republican nominee for POTUS in 2016, Donald Trump.

Counsel for the plaintiffs, in North Carolina, Arnold Porter of Washington DC, were, at the same time, representing plaintiffs fighting an attempt by the Trump administration to add a question to the form for the upcoming 2020 census. This question being, "Are you a US Citizen?".

But in the Hofeller Files, the attorneys found an unpublished study by Hofeller, proving that the motive for this question was to benefit, "Republicans and non-Hispanic Whites" in the upcoming Redistricting efforts. As this revelation cast such doubt on the motives for the question, SCOTUS determined that it could NOT be added to the 2020 questionnaire.

GOP lawyers went to extreme lengths attempting to prevent The Hofeller Files from being authenticated and admitted into evidence.  They failed.

Even after the authentication, the RNC and my father's former business partner, Dalton Lamar "Dale" Oldham, demanded that the files were, illegally obtained, improperly obtained, proprietary, covered by attorney-client privilege, and/or represented "trade secrets" of the firm, Geographic Strategies and the Republican National Committee.

In the summer of 2019, with the election and the census looming, motions by the GOP defendants included the suggestion that the external drives themselves should be destroyed...

(Keep in mind, that the actual computers containing the files, remained and still remain in the possession of Geographic Strategies, now Dale Oldham. Mr. Oldham relentlessly dodged subpoena after subpoena, and to this day has not responded to any subpoena, or turned over the original, "Hofeller Files").

The motion to destroy the files prompted me to begin aggressively distributing copies of the files to journalists, many of whom wrote informative exposes, but limited by liability issues, found themselves unable to publish the files, in their original state.

Frustrated, and plagued with a sense of urgency, I decided to publish the files myself.  This proved to be as daunting a task as I predicted.  Along with the sheer volume of the data, complications included my father's indelicate co-mingling of personal and professional files (a tactic often employed to evade discovery).

The task confounded several hosting companies, with my own Google Drive proving to be the only platform that could, even for a few days, handle the traffic.

Even the Google Drive, however, eventually succumbed to the pressure after six days.   Fortunately, by then, we had several hosts mirroring the content, as well as parties making and seeding torrents.

My team for maintaining this site and for distributing my copy of The Hofeller Files is only I. Yes, kids, I am the only person helping me with this. So far, the only offer I've had to turn down is none. Offer to help me with anything, even checking links, or answering emails, or promoting anarchy or an end to government corruption. Make me an offer I can't refuse...which is any offer.  You might be surprised how eager I am to accept it.

Since the earlier publication resulted in what I feel are disappointing results from the world of database managers, website administrators, special interest groups and universities, it is my hope to eventually try for another publication.  I have no idea when I'll have time to do that.

Where to find The Files

If it's been a week, hmu again. Peace!